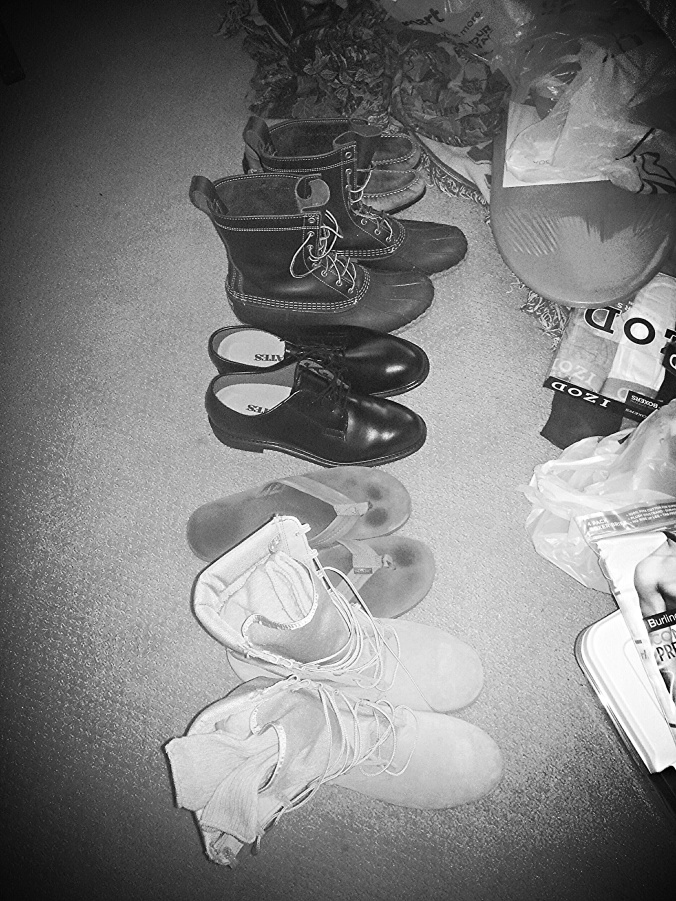 I phoned five different stores,  narrowed our possibilities down to two older downtown department stores and a place with a really funny name that sounded like nothing to do with shoes or military attire.

Just as well, no one answered the phone because I was a little confused about a shop claiming to sell desert boots but calling itself,  “Little Elves Shop”. The shoes he needed were needed soon, must be broken in, must meet specific requirements. I was thrilled to plan our shopping day, first stop, downtown and just across the river into Georgia.

Wrong!  This sprawling expanse of a dark and damp department store contained old clothes, old shoes and old men who explained that the shoes might be damaged because the roof fell in on the store a while back. Smushed flat shoes, corduroy pants with ridged cords thick like Brady Bunch bell bottom jeans and military jackets…pile upon pile. Crazy as it seems, I was hoping for the shoes. Maybe smushed shoes meant broken in. I was getting desperate.

We left, my son and I, shaking our heads but laughing. A shop across the street caught my eye, “Law Enforcement Command Center”. I crossed the street, pressed my face to the window, saw what might be the shoes and knocked on the door, a desperate mom in need of shoes for my college boy.  The store had closed five minutes earlier.

“Austin” I say,  “there’s one we can try. It’s called Little Elves Shop.” His face priceless, as I called and a gentleman answered.  Same story, new person  “I need shoes for my son. He’s going to The Citadel in August. I can’t find them anywhere!”  “Come on down” he said.  “I’ll help you out.”  So, of course we headed that way.

Weaving back streets,  a quiet little town with four wheelers and lawn mowers out for rides, we found the place, Little Elves Shop.  A sign warned us to drive slowly, a bump in the driveway in front of a tiny little shed with an  “Open, Come in”  sign beckoning us to enter. We both stood, unsure of the little shop. We were there and he said he could help, he said come on down. He was expecting us. We had to go in.

So, we did. Walked in and he perked up. He was a thin man,  small in stature and bent over slightly, he perked up and said, “Well, hello there! I thought I was tall but you are a some kinda tall, young man!”  My son is 6′ 5″. He gets this a lot. He endures it mostly.  He smiled as the owner scurried excitedly meandering through the racks of clothes to look for shoes in the tiny little military and memorabilia filled shop, jam packed with uniforms, shoes, jackets, boots and shoes.

He found the boots. They fit.  He sold us socks, Brasso, Kiwi shoe polish, shirt stays and a shoe shine kit. He would order the black military oxfords if we couldn’t find them, not patent, not corifam  (No, I had no idea what that meant).

But, in between and along the way, he imparted wisdom and Austin and I listened.

We heard of his small town high school days in the Beta Club. He was an only child, both parents disabled and yet he was selected to travel to Missouri. He had a good business head he told us, but was poor.  He had charm and a solid bit of good sense. He was, smart and was selected to travel in a competition nevertheless, he said.

He smiled and winked as he told Austin about the banquet after the awards. He said he found himself in an almost empty ballroom staring across the room at the prettiest girl he’d ever seen. He told my son, back in those days young men respected young women. You were never too forward.

He asked Austin, “What do you think I did?  Well, I had no choice but to walk right over and ask her to dance and we danced for hours.”

He told us he returned to the tiny town of Greenwood and she to her home, her daddy a wealthy businessman. He worked in a mill, his parents disabled, limited income. She wrote him he said, inviting him to her graduation. She told him her daddy wanted to meet him. His life would change. It could be his answer. It could have changed his life, he said.

“Nevertheless,” he said, “I got sick and couldn’t go.”   He came down with appendicitis and was close to death. The girl from the Midwest never wrote again.

And then he smiled, telling how for a time he dated five girls at once until two showed up at the same place and then, “Austin” he said, chuckling  “for five years I couldn’t pay a girl for a date.”

I imagined him handsome, confident, sharply dressed for dancing. I imagined the girl from the Midwest dressed in flowery pastel, dancing, swaying with the sweet Southern boy full of charm and  confidence.

Handsome and sure of himself.

“Nevertheless, I  married the one of the five who said yes.  I call her my little bride.” he shook his head, smiling.

He got quiet then and talked of Vietnam and his shop helper, a veteran working with him and for him, handicapped by war, a struggling victim of PTSD. He told us of this soldier’s company. Of the deaths of men led by him, carried by him,  their fatally wounded bodies, he the only survivor.

“He can’t be around loud noises and he drifts off in thinking.

Nevertheless, he lived although his friends died.”

“Nevertheless, it is a worthy and brave commitment.”

Then, the heaviness shifted and we, my son and I eased towards the exit, boots and various items in hand, plans to order the shoes.

He looked at my son and said, “You are a fine young man.”

I smiled, thanked him and we left.

We found the shoes the next day, the law enforcement uniform shop with courteous, efficient and ease of purchase staff.

Nevertheless, I called the little shop owner to say I found the shoes. He invited us back, me actually.

He has a back yard filled with flowers. He promised to help Austin and me dig up a few of a certain ones, moon flowers he called them.

“You can watch them bloom at night” he said. “Plant a few, they’ll make you smile when you’re missing your boy.”

I’m fascinated now with the idea and truth of “nevertheless”. It’s all through the Bible…the word, the idea of good in spite of, of grace and good from unexpected, from uncertainty.

Of things turning out for us despite us.

This time and this transition, this much to be prepared for challenge.

This journey of faith

The little man from the Little Elves Shop called again.  He wanted me to know that each and every time Austin comes to mind, he’ll stop and pray. He wanted me to tell Austin this and told me again, “He’s a fine young man.”

“I had hoped to do business with you again.”

“Nevertheless, I enjoyed meeting you and Austin”, he added.

I may stop for a visit and some wisdom, by Little Elves Shop,  nevertheless.

4 thoughts on “Wisdom, Shoes and the Journey of Nevertheless”

This Downside Up Life
Coming to Light

a novel of South Sudan

Sharing His Love Through My Story

Finding God in the Everyday

Not Your Average Career Site

Count it all joy

Bringing encouragement and inspiration for your day!

“With an unveiled face, being transformed into the image of Christ–2 Cor. 3:18”

My Sea of Thought

Sharing Stories and Lessons as I Embark in the Everyday

My Simple Faith Walk in Italy

Celebrating Beauty Even When It Isn’t Pretty

Gaining a heart of wisdom