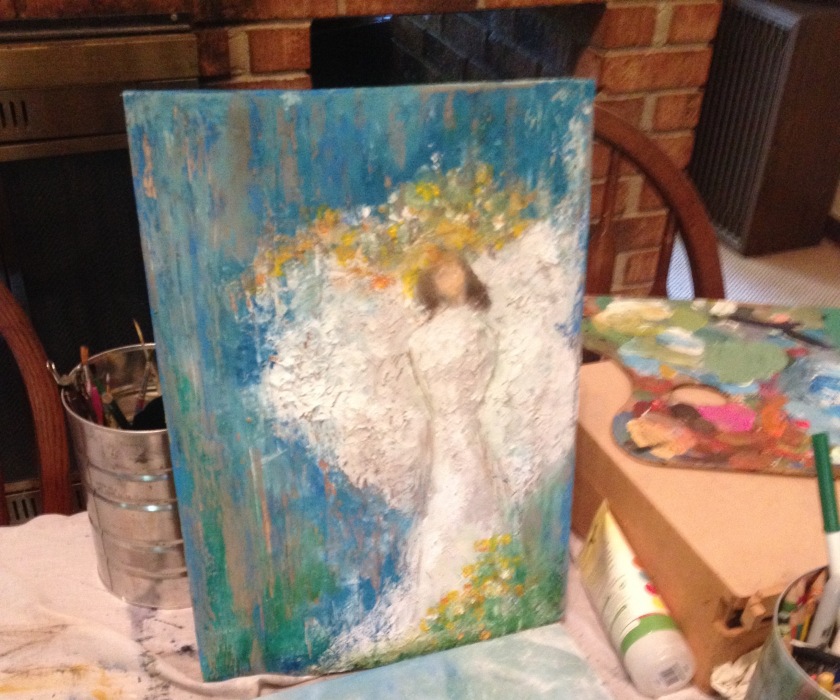 I told her that painting angels was new for me, adding texture to the wing and choosing vivid over subtle color.

I had an idea of grey, ochre and white against silvery sky.

But, I started again and I made it more me

More my heart, the blue of my eye, the brown of my bangs.

The words to a song

Yet, I told her I called it

“The Eyes of my Heart”

Left out the Lord.

Hard to say why

and it’s a small thing really

in this crazy world filled with offenses and the offended.

It’s a small thing, I know.

Still, I was troubled by my reluctance to be clear, to be outspoken about the “angel prayer”.

It’s hard to say what we need to say.

What we know to be true. What we know of the God who created us, loves us, and sustains us and desires, longs for our hearts to align with his goodness.

It’s hard to say because to oppose the things God opposes elicits accusations and that we are after all, not a people who love.

Perhaps, many have decided, we are a people who hate.

So we’re careful to speak.

I signed the painting with my life verse and name.

They’ll see, I’m certain, the words on the back above my the signature.

Might, I pray,  pause to hold it up before hanging on wall.

“Open the eyes of my heart, Lord”.

I pray they do.

I pray He does.

I pray that your hearts will be flooded with light so that you can understand the confident hope he has given to those he called—his holy people who are his rich and glorious inheritance.  Ephesians 1:18

One thought on “Hard to Say”

Beloved, You are Mine!

Connecting You With Our Community